Between the physical and the digital

A design journey of being speculativeunder the ubiquitous computing

We are facing a new coming world, where the dualism of the physical and the digital is disappearing. This transformation could fundamentally challenge our current life pattern and the perception of matters. For an instant, the common notion like occupation and marriage could be overturned for the foreseeable future. Our life now is surrounded by black boxes. It is not easy for users to recognize what they truly need. We would have lost users in the canter of the user-cantered design method. The good invention comes more and more rarely from research on users, but from visions and dreams. What is the consequence of those dreams? Whose dream shall be realized? In this project, I explored a design journey through the method of “collective dreaming” to engage more people in designing the future.

In this project, you are invited to a journey of using design to discuss and build a story about alternatives between the physical and the digital. The discussion would be supported under the frame of ubiquitous computing and the method of speculative design. During the journey, a toolkit would be presented. Tools are considered as a form of solidification of cognition, as well as the guidance of problem solving. By designing and using the toolkit, more could be invited and engaged in forming ideas and diversify from one idea into many.

Dream under the Ubiquitous Computing

The merging of the physical and the digital worlds is frequently discussed under the realm of Ubiquitous Computing. I had a brief chronological research on it. This systematical theory in computer science was first proposed in 1991.

“In the twenty-first century the technology revolution will move into the everyday, the small and the invisible. The impact of technology will increase ten-fold as it is imbedded in the fabric of everyday life. As technology become more imbedded and invisible it calms our lives by removing annoyances while keeping us connected with what is truly important. This imbedding, this invisibility, this radical ease-of-use requires radical innovations in our connectivity infrastructure. ”
–– Mark Weiser[3]

Inspired by Weiser’s vision, enormous researches were conducted and ideas were popping up: Tangible Bits, Smart Environment, Smart Home, peripheral interactions etc. Meanwhile, critical voices amplified after years’ researches. The main problems were about the inaccurate detection and interpretation in human behavior and the issue in violation of human privacy and ethic problem under recording, tracking and monitoring. The idea about balancing the calmness in technology with “exiting, stimulating and provocative” was raised.[5] One crucial problem was that users treated the new technology still as novelty until the popularization of smart phone. The development the personal devices have trained the users with new digital techs and at the meantime it exacerbated the problem of overloading data and distraction. The concept like using peripheral interactions, and expanding human sense to increasing the capability in processing information were raised. The information shall not only be displayed visually but also in sounds, in ambient environment and eventually in a form of substance, as new kind of material. I generated a rough spectrum with couple important pitch point. The basic frame is based on Mark Weise’s UbiComp and Ishii’s vision. [5][6] 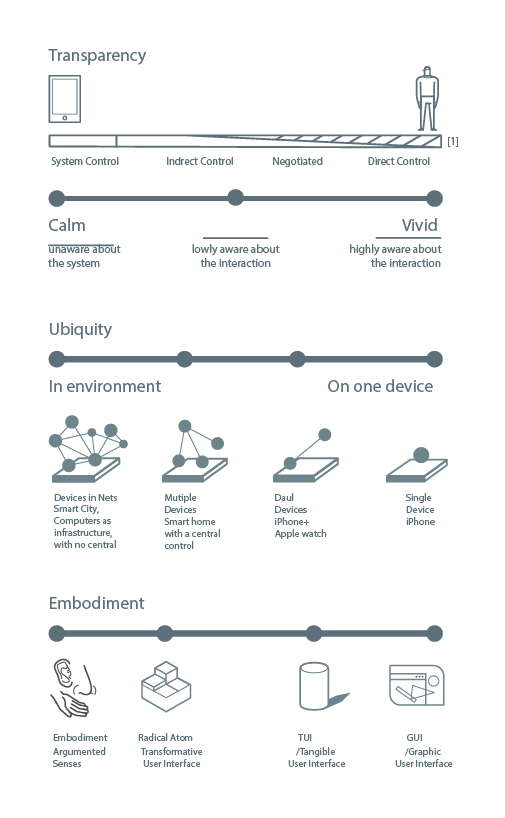 Ubiquity
The Ubiquity describes the access to computation, everywhere or through a single device. As mapped in-between of everywhere (computation as infrastructure in cities) and single device like cell-phone there could also be dual device system like connecting iPhone with Apple Watch and Multiple Device system with central control like Smart Home.

Embodiment
On embodiment axis, the radical atom was put at one end, as it provides the possibility of the physical and digital worlds seamlessly together. And traditional interactions like GUI is set on the other end of axis. In between there is Tangible User Interface. It has potential to involve more senses into HCI and provide intuitive and nature interactions. Moreover, an augmented sense, which is focused on creating augmented new sense of human, can be seen as provocative in embodiment.

TUE system:
Combined with three rules together, we have a TUE system for UbiComp. (see Figure 1).The blue area conveys the idea, which is more close to Mark Weiser’s UbiComp. In the other side of diagram, the red area is close to where we are now. It is also be understand as low speculative area. Never the less, there is still big area in-between, as more alternatives for the future. With some speculative attitude, this diagram can provide inspiration as shown. 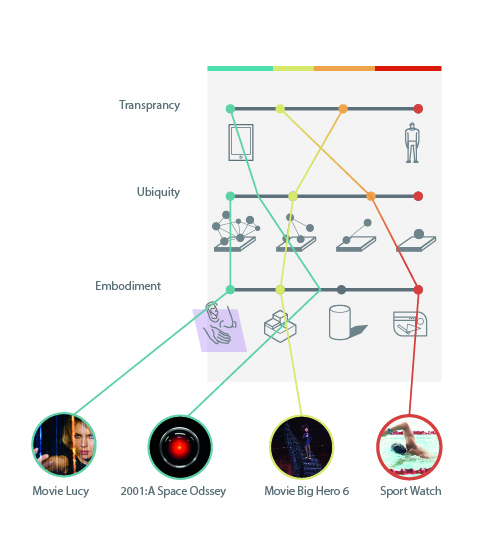 Use the methods of Speculative Design 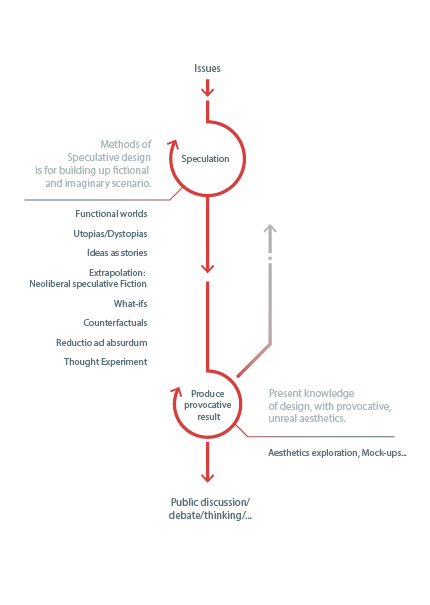 As no real user under the UbiComp the methods like user-centered design are valid in this domain. Since it is only an alternative of the future, the approaches from speculative design could have more power under this topic. “It is a method taking idea of future as tool to better understand the present and to discuss the future.”[9]

After researched the methods in speculative design, it is distinct that speculation design is based on our reasonable imagination on human and technology instead of researches on people like user center design. The challenge for designers to design speculatively is that fiction needs to be unreal, but many years of realistic practices now stand in the way. All the methods I introduced shortly above are meant to help the designers developing little more fictional, speculative attitude. After speculation, we still need our “ traditional ” design skill to design and build out the story. And because it is a speculative design project, the story is usually built in provocative, critical or ironical way, so as to invite the viewers or users to think or debate. The methods introduced above are mainly for building up fictional and imaginary scenarios. Afterwards, designers still use their present knowledge of design to produce provocative results. The problems remain:
How can we formulate this discussible topic about the near future, even though we haven’t fully experienced it? Meanwhile, the discussion should be prevented from straying too far into the future.

The toolkit as medium

The philosophies in 19th and 20th centuries had emphasized that our body knows as much as our mind in cognition. Instead of thinking every movement through, “our body is simply solicited by the situation to find the right balance so as to gain a maximum grip on the situation.”[1] Researches in psychology, biology and across cultures indicate that similar notion. Our cognition system includes “not only our brain, but also our body and dynamic relationships between our body and the physical- and social environment. “[2] Tools are designed to serve our body and mind to engage with environment. They can be seen as a solidification of cognition, and they contain the understanding from designer. Hence, embodying abstract concept into physical form would prompt understanding. Meanwhile, the tool can evoke communication and collaboration while using it. Therefore, the toolkit was designed as the medium for “collective dreaming”.

IUS Toolkit is designed to support the speculative design under the early stage of UbiComp. It contains three main elements: collections of interactions and 3 rules based on Mark Weiser’s UbiComp and collections of methods for being speculative. These three elements are also the three main steps in the process. The users should jump among these three main steps repeat so as to squeeze the story out. Meanwhile, it system has a randomness system to motivate users when they feel boring or when they get into a deadlock. Have fun.

The basic principle about how is this toolkit work is that these there elements have impact on each other during the discussion. Every element could inspire or modify the other. Therefor the main process is jumping among these three steps repetitively ant try squeezing the story out step by step. There is no particular start in this game. The first step is briefing the topic you want to discuss and choose a start among three main steps. Then you are standing at one point of the triangle-like system. Then you will always have two choices as the next step. There is no end in this game, as if there is no end in design. But you can stop when you feel happen and satisfied about the story you created during the game. And you can always restart and continue.

Randomness system came from the feedbacks of per-test. It serves as addition motivation and element of chance, stimulate thinking and evoke unexpected results. Additionally, there is a color system as reference. The noun of the color system is adjusted from Mark Weiser’s vision of UbiComp. In UbiComp the blue area is close to what Weiser suggested. Correspondingly, in Interactions the blue area suggests calm, ubiquitous and embodied interactions. In speculation, the blue area suggests the methods are more fictional, imaginary. In the red part sand for the methods, which are more close to current status quo. Future example seeing the video attached. 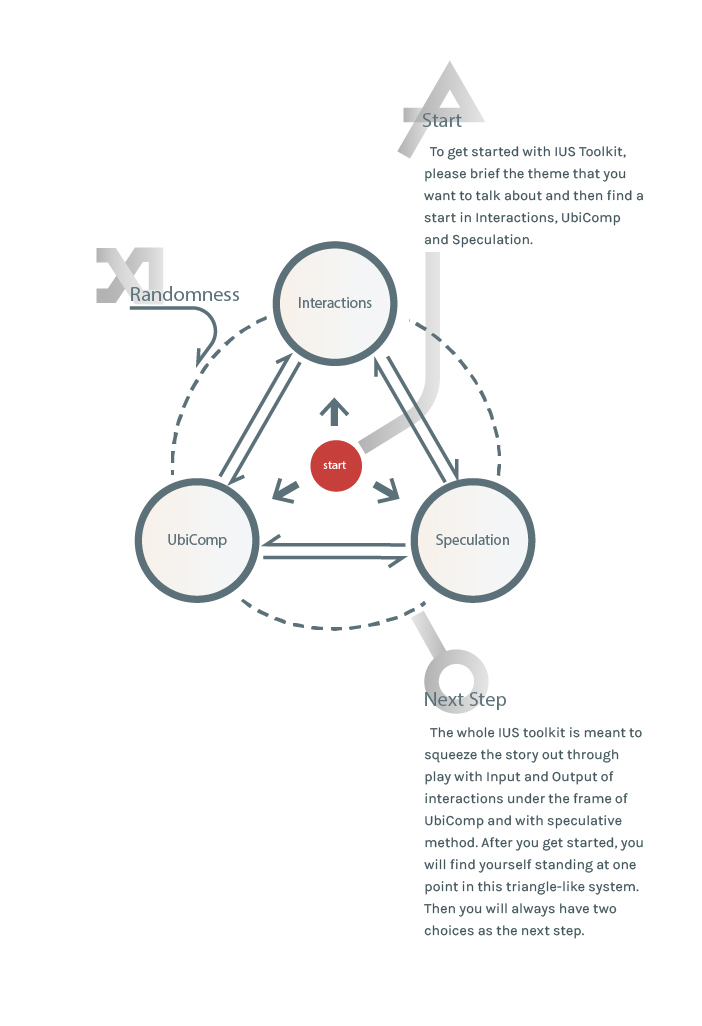 The digital part of the toolkit allows the users bring their own insights into the system and also learn from the others. Meanwhile, it support recording and analyzing the using process.

Process and Outlook of building

In the process of designing the toolkit, 3 versions of prototypes were developed and tested. According to the test on the last version, the function of toolkit is affirmative. The participants feel supported and inspired during the game of ideation. Meanwhile, with the toolkit more could be engaging to the topic of UbiComp and make contributions from perspective of design. However, there are still flaws and bug in the system of the toolkit. The UbiComp section designed by my understanding is still very constrained and superficial. It might have to mislead for the users. And methods for speculation are limited.